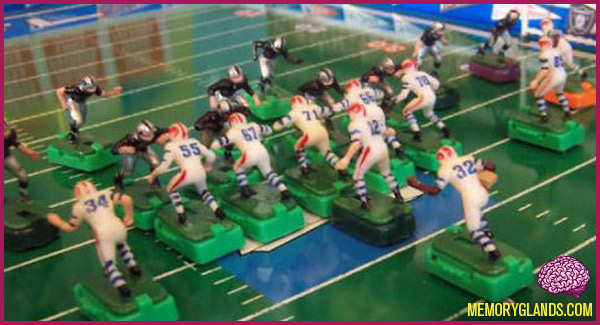 In 1947, Norman Sas, owner of Tudor Metal Products and Tudor Games, created electric football using a vibrating car race game made by Tudor as the base for the game technology. Electric football was an immediate hit. More than 40 million of the games have been sold since its creation, and new editions are sold each year.

Video games of football have supplanted electric football in popularity partly because the game did not live up to its potential. The game lacks procedures and game structure. However, electric football still thrives and has also benefited from technological progress. Players became more realistic in sculpting and appearance but there has been very limited advancement in the game play.

Miggle and the NFL stopped the working agreement around 2007. Generic players are sold now. Miggle sells pre-painted players from 18 college teams, including home and away jerseys. However as of December 2011, the Miggle website did not list any pre-painted college teams. Some were found on eBay. A new Rose Bowl board was sold but it is unclear what teams are offered. Leagues, clubs and tournaments continue to play the game. The Electric Football League, headquartered in Highland Park, Illinois, held its 17th annual Official Electric Football Super Bowl & Convention in January 2011, in Columbus, Ohio. Jamel Goodloe (Auburn Tigers) was crowned national champion, as he beat Ken Allen in the championship game. Both players hail from the Michigan-based Great Lakes Electric Football League (GLEFL).