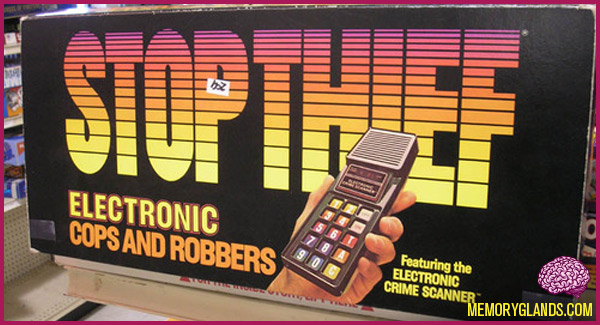 “A crime is being committed…but where? In the jewelry store? The bank? Where will the thief strike next? You and your opponents are licensed private detectives. The thief you’re after is computer controlled and completely invisible. But you can hear him! With your ELECTRONIC CRIME SCANNER you can eavesdrop on the thief whenever he moves on the board. You can hear him in the act of committing a crime. You hear him, too, as he opens a door, crosses a floor, breaks a window, runs on the street and escapes on the subway. Each sound you hear is a clue that will help you track him down. You’ll need all your skills of deduction and logic to follow the thief and corner him. Then you can call the police. With luck, the police will arrest the thief and cart him off to jail. Sometimes, though, he escapes from them. At other times, he’s just not where you think he is! If you can catch this thief, you’ll earn a large reward. If he gives you the slip, he’ll rob again…and again…and again…”