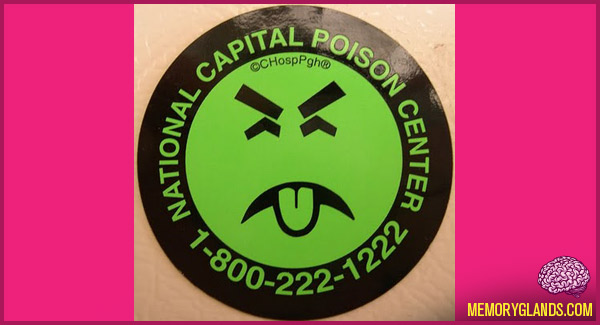 Mr. Yuk is a trademarked graphic image, created by the Children’s Hospital of Pittsburgh, and widely employed in the United States in labeling of substances that are poisonous if ingested.

Mr. Yuk was conceived by Dr. Richard Moriarty to help children learn to avoid ingesting poisons. Living in Pittsburgh, the skull and crossbones previously used was not terribly helpful, due to the fact that the Jolly Roger was the mascot for the local baseball team, the Pittsburgh Pirates. The color was chosen when Moriarty was showing different colors to students, and the green that was chosen was christened “Yucky!” by a young child. Hence, the name and the color. The design for Mr. Yuk was created by Wendy Courtney Brown, then a 4th grade student at Liberty Elementary in Weirton, West Virginia, as part of a Pittsburgh Poison Control design contest.