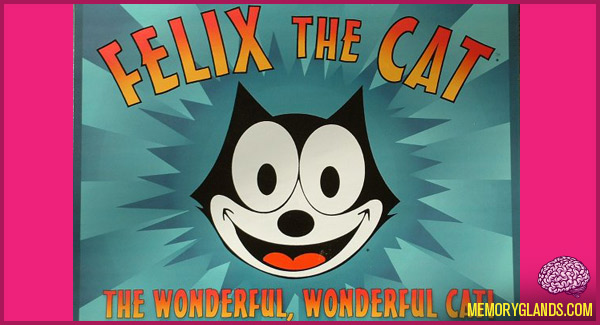 Felix the Cat is a cartoon character created in the silent film era. His black body, white eyes, and giant grin, coupled with the surrealism of the situations in which his cartoons place him, combine to make Felix one of the most recognized cartoon characters in film history. Felix was the first character from animation to attain a level of popularity sufficient to draw movie audiences.

Felix’s origins remain disputed. Australian cartoonist/film entrepreneur Pat Sullivan, owner of the Felix character, claimed during his lifetime to be its creator. American animator Otto Messmer, Sullivan’s lead animator, has more commonly been assigned credit by Americans in recent decades. Some historians argue that Messmer ghosted for Sullivan although Messmer’s creation claim has not been proven. The art and lettering in Feline Follies have been identified as Pat Sullivan’s work, whereas Messmer’s claim completely excluded Sullivan from the animation. What is certain is that Felix emerged from Sullivan’s studio, and cartoons featuring the character enjoyed success and popularity in the 1920s.

In the early 1920s Felix enjoyed enormous popularity in popular culture. He got his own comic strip (drawn by Messmer) beginning in 1923, and his image soon adorned all sorts of merchandise such as ceramics, toys and postcards. Several manufacturers made stuffed Felix toys.

Felix cartoons began airing on American TV in 1953. Meanwhile, Joe Oriolo, who was now directing the Felix comic strips, introduced a redesigned, “long-legged” Felix in a new animated series for TV. Oriolo also added new characters, and gave Felix a “Magic Bag of Tricks”, which could assume an infinite variety of shapes at Felix’s behest. The cat has since starred in other television programs and in two feature films. Felix is still featured on a wide variety of merchandise from clothing to toys. Oriolo’s son, Don Oriolo, now controls creative work on Felix movies.