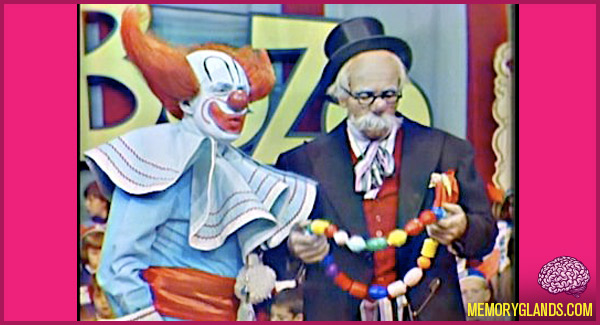 Bozo the Clown is a clown character very popular in the United States, peaking in the 1960s as a result of widespread franchising in early television.

Originally created by Alan W. Livingston for a children’s storytelling record-album and illustrative read-along book set and portrayed by Pinto Colvig, the character became very popular during the 1940s and was a mascot for record company Capitol Records. The character first appeared on television in 1949. After the creative rights to Bozo were purchased by former Bozo actor Larry Harmon in 1956, the character became a common franchise across the United States, with local broadcasting companies producing their shows featuring the character; Harmon bought out his business partners in 1965 and produced Bozo’s Big Top for syndication from 1966, while Chicago’s Bozo’s Circus which went national via cable and satellite in 1978.

The most notable performers to have played Bozo include Frank Avruch (1966–1970s), Bob Bell (1960–1984) and Joey D’Auria (1984–2001). Bozo TV shows were also produced in other countries including Mexico, Thailand, Australia, Greece and Brazil. Larry Harmon claimed that more than 200 actors have portrayed the clown.