This Is Your Brain on Drugs 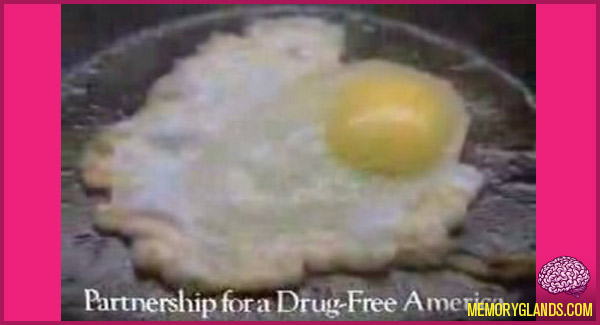 This Is Your Brain on Drugs was a large-scale US anti-narcotics campaign by Partnership for a Drug-Free America (PDFA) launched in 1987, that used two televised public service announcements (PSAs) and a related poster campaign.

The first PSA showed a man who held up an egg and said, “This is your brain,” before picking up a frying pan and adding, “This is drugs.” He then cracks open the egg, fries the contents, and says, “This is your brain on drugs.” Finally he looks up at the camera and asks, “Any questions?” A shorter version of this, simply showing a close-up of an egg dropping into a frying pan, was used a few years later.

The PSA was so popular that Freddy’s Dead: The Final Nightmare spoofed the PSA with Johnny Depp, who appeared in the first Nightmare on Elm Street movie. The PSA goes on as normal until Robert Englund (who plays Freddy Krueger) hits Depp with the frying pan and says, “Yeah! What are you on? Looks like a frying pan and some eggs to me.”