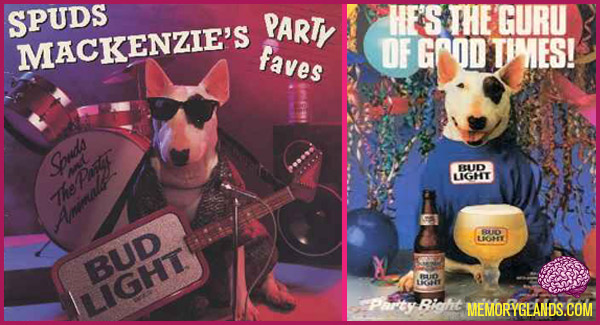 Spuds MacKenzie was a fictional dog character created for use in an advertising campaign marketing Bud Light beer in the late 1980s. The dog first showed up in a Bud Light Super Bowl XXI ad in 1987. During the height of his popularity, large amounts of Spuds merchandise was available, such as plush toys and t-shirts.
The dog, a Bull Terrier, existed not without his share of controversy. Shortly after Spuds’ rise to fame it was learned that the dog, who was portrayed as male in the commercials, was actually female. The ads were also the subject of attacks and calls for censorship by temperance-oriented groups. In 1992, the Center for Science in the Public Interest, along with Mothers Against Drunk Driving, charged that Anheuser-Busch was pitching the dog to children. Although the Federal Trade Commission found no evidence to support that allegation, the ads were dropped.