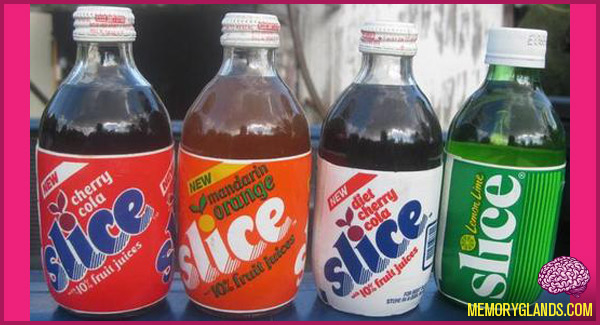 The original design of the can was a solid color related to the flavor of the drink. These were replaced in 1994 with black cans that featured colorful bursts (once again, related to the flavor of the drink), along with slicker graphics. In 1997, the cans became blue with color-coordinated swirls. The original orange flavor was reformulated around this time with the new slogan, “It’s orange, only twisted.” Orange Slice has since been changed back to its original flavor.

In early 2006, Pepsi resurrected the Slice name for a new line of diet soda called Slice ONE. Marketed exclusively at Wal-Mart stores, Slice ONE was available in orange, grape and berry flavors, all sweetened with Splenda. As of 2009, Slice (orange, diet orange, grape, strawberry and peach flavors) was available solely from Wal-Mart Stores.