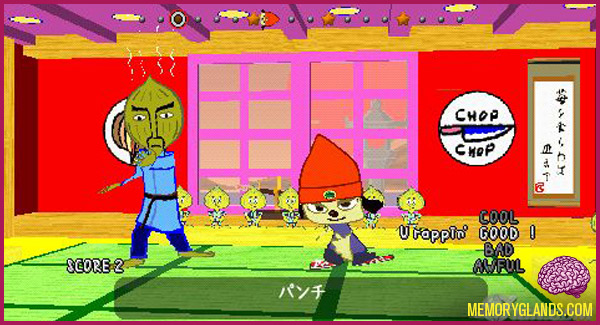 Parappa the Rapper is a rhythm video game for the Sony PlayStation created by Masaya Matsuura (the former leader of the Japanese “Hyper Pop Unit” PSY S) and his NanaOn-Sha company. Released in Japan on December 6, 1996, followed by releases in North America on October 31, 1997 and Europe in September 1998, it was one of the first rhythm video games.

While the gameplay is not challenging for experienced gamers, the game is remembered for its unique graphic design, its quirky soundtrack and its bizarre plot. Despite being made in Japan, all of the game’s songs and dialogue are spoken in English in all versions. The game is named after its protagonist, Parappa, a rapping dog with the motto, “I gotta believe!”.

It spawned a merchandising campaign in Japan, a spinoff in 1999, an anime series in 2001, and a direct sequel for PlayStation 2 in 2002. A PlayStation Portable port of the original game was released in Japan in December 2006 in North America and Europe in July 2007.