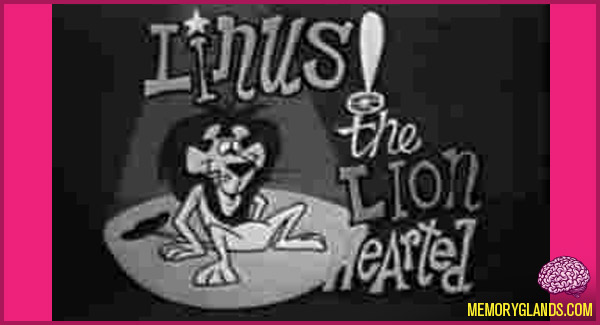 Linus the Lionhearted is an animated cartoon featuring a main character of the same name. The character was created in 1959 by the Ed Graham advertising agency, originally as a series of ads for General Foods’ Post Cereals. At first, Linus was the spokesman for the short-lived Post cereal “Heart of Oats” (a Cheerios imitation). Eventually, the lion was redesigned and reintroduced in 1963 to sell Crispy Critters, which featured Linus on the box. The ads were so popular that a television series was created in 1964 (with General Foods as sponsor) and ran on the CBS network until 1966, then reruns [in color] aired on ABC from 1966, until it was cancelled three years later. A coloring book was published which detailed the adventures of So-Hi going on a scavenger hunt in order to break a curse on a two-headed bird, who is then transformed into a boy due to So-Hi’s dedication.

In addition to Linus, a rather good-natured “King of the Beasts” who ruled from his personal barber’s chair and voiced by Sheldon Leonard, there were other features as well, all based on characters representing other popular Post cereals (Sugar Crisp, Alpha-Bits, Rice Krinkles, Post Toasties, etc.). The best-known of these was Sugar Bear, who sounded like Bing Crosby and was voiced by actor Gerry Matthews. There was also a postman named Lovable Truly, a young Asian boy named So Hi, and Rory Raccoon.

A long-play record album was also released as a premium in the year of the show’s debut featuring the characters (voiced by the same stars as the animated cartoon) singing with re-written lyrics familiar songs such as “Jimmy Cracked Corn.”