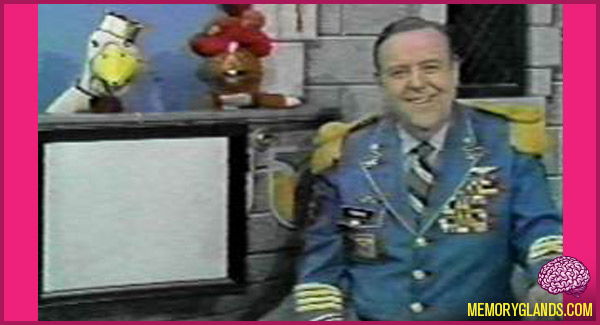 Garfield Goose and Friends is a children’s television show produced by WGN-TV in Chicago, Illinois, United States from 1955 to 1976. The show was known as Garfield Goose and Friend from 1952 to 1955 when it aired on WBKB and WBBM-TV. It was the longest running puppet show on television. The host of the show was Frazier Thomas, who did all of the talking. The show centered on a clacking goose puppet named Garfield Goose, who considered himself “King of the United States.” There were many other puppet characters such as Romberg Rabbit, Macintosh Mouse, Chris Goose (Garfield’s nephew who was born on Christmas, hence “Christmas Goose”) and a sleepy bloodhound called Beauregard Burnside III (whose name happened to be a mix of two American Civil War generals). The show used a “Little Theater Screen”, upon which the camera would zoom before cartoons such as Clutch Cargo and Space Angel were broadcast.