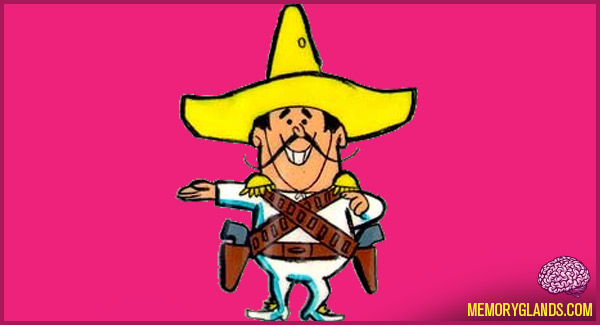 The Frito Bandito was the cartoon mascot for Fritos corn chips from 1967 to 1971. The Bandito was created by the Foote, Cone & Belding Agency, and animated by Tex Avery. The character was voiced by Mel Blanc, who used an exaggerated Mexican accent not unlike another character of his, Speedy Gonzales. The Frito Bandito spoke broken English and robbed people of their Frito corn chips, a reference to the “Mexican bandit” stereotype in western movies. He also complained that he was being pursued by the “Frito Bureau of Investigation”.

Pressure from the National Mexican-American Anti-Defamation Committee and others prompted an update to the character; his gold tooth and stubble were eliminated and his hair combed. The character was completely retired in 1971. He was initially replaced by the Muncha Bunch, a group of cowboys, which then were replaced by W.C. Fritos, modeled after comedian W.C. Fields.

The Frito Bandito campaign included a song sung to the tune of the well-known traditional Mexican song “Cielito Lindo”:
Ay, ay, ay, ay! I am dee Frito Bandito. I like Frito’s Corn Chips. I love them, I do. I want Frito’s corn chips. I’ll take them, from you.