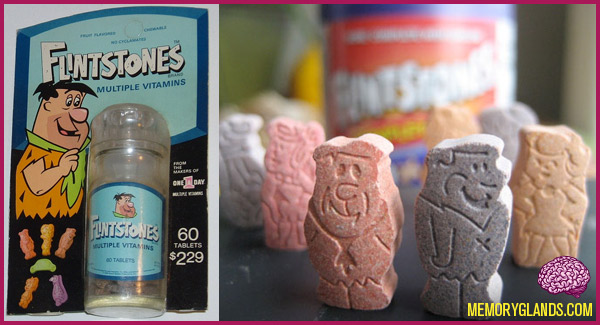 Flintstones Chewable Vitamins are supplemental multivitamins for children based on the animated sitcom The Flintstones. They were introduced in 1968 by Miles Laboratories and taste faintly like candy.

The vitamins are one of the most successful Flintstones products. Some advertisements have been under heavy rotation without being related to The Flintstones. Their jingles of “We are Flintstone kids!” and “Ten million strong and growing!” (composed by Martin O’Donnell) has reached fame through the heavy circulation of advertisements.

Miles Laboratories was acquired by Bayer in 1979. The pills can be found on the Internet and in local stores, and feature pills in the shapes of the following characters: Fred Flintstone, Wilma Flintstone, Pebbles Flintstone, Barney Rubble, Betty Rubble, Bamm-Bamm Rubble, Dino, and The Great Gazoo. For over twenty years, Betty was not included as one of the vitamins. However, after a grassroots campaign and the results of a Bayer telephone poll came in favor of including Betty, the character was added to the lineup, replacing the Flintstone car.