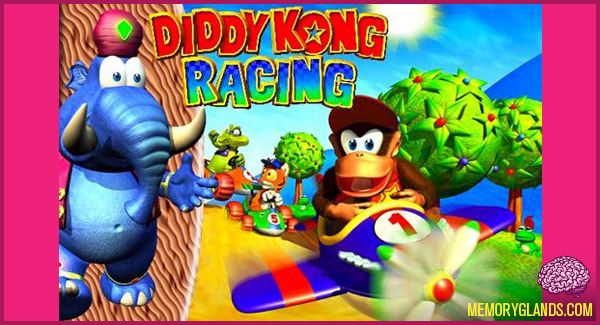 Diddy Kong Racing is a 1997 racing game for the Nintendo 64 developed by Rareware. 800,000 copies were ordered in the two weeks before Christmas 1997, making it the fastest selling video game at the time, according to the Guinness Book of World Records. It is the first game to spin off from the Donkey Kong Country series. An enhanced remake for the Nintendo DS titled Diddy Kong Racing DS was released on February 5, 2007. It currently stands as the Nintendo 64’s sixth-most best-selling game.

A racing game like Mario Kart 64, Diddy Kong Racing also has a distinctive adventure mode. Some of the playable characters would later appear in their own franchise titles. The game was partially intended to introduce these future franchise characters so that gamers would recognise them when these games were released. In Diddy Kong Racing, a player can choose to drive a car, hovercraft, or airplane, though a certain level may require that the player picks one of these.

A Donkey Kong themed racing game was eventually released, however, in the form of Donkey Kong Jet Race.