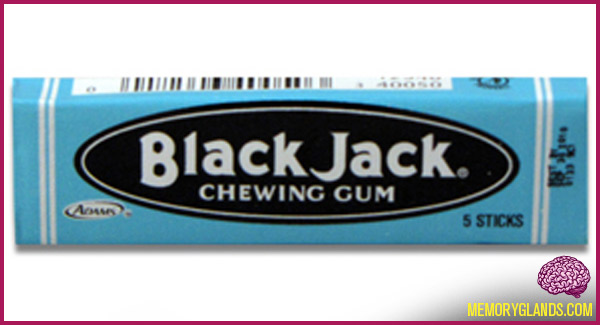 Black Jack is an aniseed flavored chewing gum made by Cadbury Adams, originally the American Chicle Company.
In 1869, exiled former Mexican president and general Antonio Lopez de Santa Anna (famous for his victory over the Alamo defenders) was living in New Jersey. He brought a ton of Mexican chicle with him, in hopes of selling it to raise funds to help him return to power in his own country. He persuaded Thomas Adams of Staten Island, New York to buy it. Adams, a photographer and inventor, intended to vulcanize the chicle for use as a rubber substitute. Adams’ efforts at vulcanization failed, but he noticed that Santa Anna liked to chew the chicle, which the ancient Mayans had done. Disappointed with the rubber experiments, Adams boiled a small batch of chicle in his kitchen to create a chewing gum. He gave some to a local store to see if people would buy it; they did and he began production.