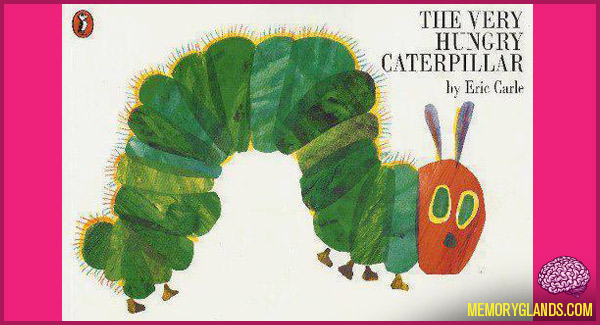 The Very Hungry Caterpillar is a children’s picture book designed, illustrated and written by Eric Carle, first published by the World Publishing Company in 1969, later published by Penguin Putnam. The book follows a caterpillar as it eats its way through a wide variety of foodstuffs before pupating and emerging as a butterfly. The winner of many children’s literature awards and a major graphic design award, it has sold 30 million copies worldwide. It has been described as having sold the equivalent of a copy per minute since its publication. It features distinctive collage illustrations (Carle’s third book, and a new style at the time), ‘eaten’ holes in the pages and simple text with educational themes – counting, the days of the week, foods, and a butterfly’s life stages. There have been a large number of related books and other products, including educational tools, created in connection to the book. Whilst the caterpillar’s diet is fictional, rather than scientifically accurate, The Very Hungry Caterpillar introduces concepts of Lepidoptera life stages where transformations take place including the ultimate metamorphosis from ‘hungry caterpillar’ to ‘beautiful butterfly’, and the book has been endorsed by the Royal Entomological Society.It has been described as “one of the greatest childhood classics of all time.”