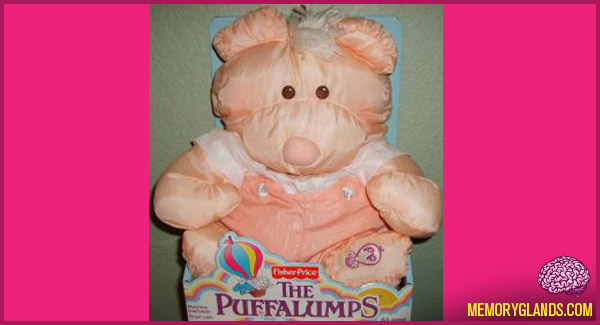 Puffalump is a brand of stuffed animals created by Fisher-Price in 1986. They were light stuffed animals made of a parachute material and poly-fil stuffing. When they were released, there were six animals: cat, bunny, dog, bear, lamb and cow. They later expanded to include varieties like Puffalump Pets, Baby Puffalumps, Sleeptime Puffalumps, Barnyard Puffalumps, Puffalump Kids, Pretty Hair, Jungle Juniors as well as ones of Easter, Christmas, and Valentine’s Day varieties. In 1999, Puffalumps returned to the shelves in the Care for Me variety that included a baby bottle that made realistic noises with the Puffalumps. The Care for Me Puffalumps had a purple cat, blue dog and pink cow as the first releases.