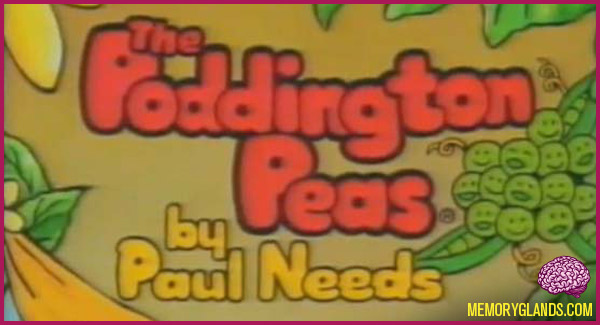 The Poddington Peas is an animated British children’s television series made by Paul Needs and Colin Wyatt; the single series has 13 episodes and was first aired on the BBC in 1989. A second season using CGI animation was planned in 2008.
The theme song describes the peas as being “down at the bottom of the garden”. Human size garden objects, giant in size to them, are seen such as up turned flower pots serving as most of their buildings. Humans themselves are never seen or mentioned.

In 1992, writer Phil Gardner was employed by Poddington plc to help write some new episodes – including one intended to pilot the series in the USA, and featuring a new group of characters, the Bugz.

There were also paper back books by Paul Needs, illustrated by Colin Wyatt and published by Box Tree / Award Publications.