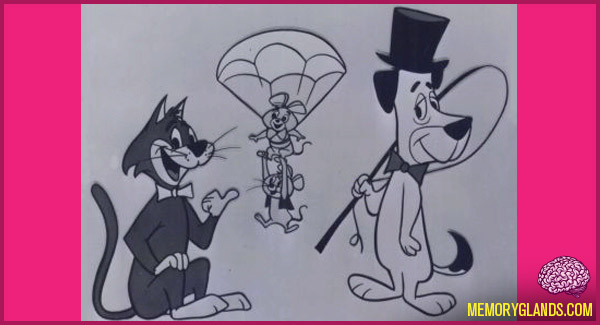 The Huckleberry Hound Show is a 1958 syndicated animated series and the second from Hanna-Barbera following The Ruff & Reddy Show, sponsored by Kellogg’s. Three segments were included in the program: one featuring Huckleberry Hound; another starring Yogi Bear and his sidekick Boo Boo; and a third with Pixie and Dixie and Mr. Jinks, two mice who in each short found a new way to outwit the cat Mr. Jinks. The Yogi Bear segment of the show proved more popular than Huckleberry’s; it spawned its own series in 1961. A segment featuring Hokey Wolf and Ding-A-Ling was added, replacing Yogi Bear during the 1960-61 season. In 1961, the series became the first animated program to be honored with an Emmy Award. The Huckleberry Hound Show contributed to making Hanna-Barbera a household name, and is often credited with legitimizing the concept of animation produced specifically for television.