The Get Along Gang 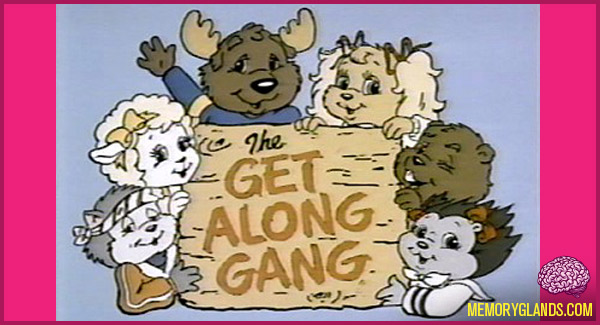 The Get Along Gang were characters created in 1983 by American Greetings’ toy design and licensing division, “Those Characters from Cleveland” (now American Greetings Properties), for a series of greeting cards. The Get Along Gang was a group of twelve (and later, fourteen) pre-adolescent anthropomorphic animal characters in the fictional town of Green Meadow, who had formed a club that met in an abandoned caboose and who had various adventures whose upbeat stories intended to show the importance of teamwork and friendship. The success of the greeting card line led to a Saturday morning television series, which aired on CBS for one season, from 1984 until 1985. The time slot was replaced by Disney’s The Wuzzles. From January until July 1986, CBS aired reruns.

Each of the characters had obvious faults, which they learned to overcome with the aid of their friends. Montgomery Moose, the group’s leader, was quite clumsy, Woolma Lamb was extremely vain and self-centered, Dotty Dog could be careless, Portia Porcupine had temper tantrums, Zipper Cat could be over-the-bit, and Bingo Beaver could be greedy and tended to get himself and/or others into trouble, although he was not mean-spirited like the Gang’s enemy, Catchum Crocodile.