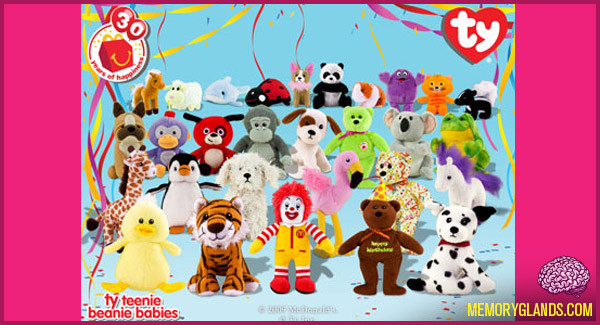 The Teenie Beanies are miniature Beanie Babies that were offered in McDonald’s promotions from 1996-2000.

The Teenie Beanies were most in demand from McDonald’s in the first year they were offered, and declined in popularity every year thereafter, even though more were produced each time.

During the height of their popularity, which was in 1998, Teenie Beanies were the cause of many fights at various McDonald’s locations, resulting in calls to police, criminal charges, and injuries. These included a Miami area McDonalds employee, who was charged with the theft of the toys. Though they were sold for around $2 each along with a Happy Meal, they were often sold in 1996, 1997, 1998, 1999, and 2000 for much higher prices on the secondary market after the promotion.

Some McDonalds locations exhausted their supplies of Teenie Beanies before the promotion was over.