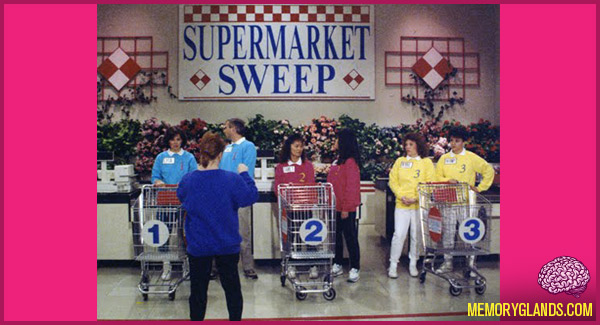 Supermarket Sweep is an American television game show. Part of the format was similar to other team-based quiz shows; the other part was a live-action race through a supermarket, a novel concept at the time. In the timed race, cameras followed the teams with shopping carts through a large vacated supermarket with several aisles; the value of items thrown into the cart determined the winning team. The original show was broadcast on ABC (December 1965–July 1967), with revivals airing on Lifetime (February 1990–May 1995, reran until August 1998) and later PAX (April 2000–May 2003, reran until March 2004).

ABC’s Supermarket Sweep was broadcast from Food Fair supermarkets, mostly around New York City. For the Lifetime version, a mock supermarket was created at Hollywood Center Studios. It was modeled after a Hughes Market until September 1993, when it was remodeled again after a Unified Western Market. The PAX version was staged in the same set and studio as the Lifetime version. Beginning in September 2001, the show moved to NBC Studios.