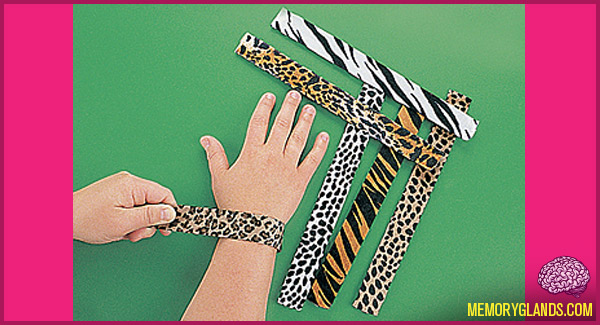 A slap bracelet (or snap bracelet) is a bracelet consisting of layered, flexible stainless steel bistable spring bands sealed within a fabric cover. The bracelet can be straightened out, creating tension within the springy metal bands. The straightened bracelet is then slapped against the wearer’s forearm, causing the bands to spring back into a curve that wraps around the wrist, securing the bracelet to the wearer.

Invented by Wisconsin teacher Stuart Anders and sold under the brand name “Slap Wrap”, the slap bracelet was a popular fad among children, pre-teens and teenagers in the late 1980s and early 1990s and was available in a wide variety of patterns and colors. The bracelet was banned in several schools following reports of injuries stemming from improper use. The bracelet was later reintroduced with a plastic spring, but there were still reports of injuries. More recently, slap bracelets have been worn on the lower legs of cyclists to prevent trousers from being tangled in the gear system.