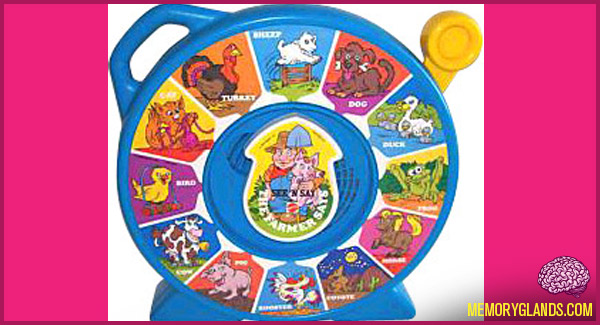 See ‘N Say is an educational toy created by the toy company Mattel in 1965 after the success of its talking Chatty Cathy doll.

See ‘n Say, introduced in 1965, was the first Mattel talking toy that allowed children to choose the exact phrase they wanted to hear by adjusting a pointer on the toy’s face to a particular item and pulling the “chatty ring.” The Farmer Says See ‘n Say made animal sounds when a pointer shaped like a miniature farmer was aimed at pictures of animals on its dial. For example, when pointed at an image of a duck, the phrase “This is a duck…quack, quack, quack” was heard. Likewise, the Bee Says See ‘n Say recited different letters of the alphabet (“G…Girl”) when its bee-shaped pointer was aimed at them. Unlike other toys, the original See ‘n Says required no batteries. Instead, sound was produced by a simple low-fidelity phonograph record driven by a metal coil wound by pulling the toy’s string. This was the same mechanism used in Chatty Cathy dolls.