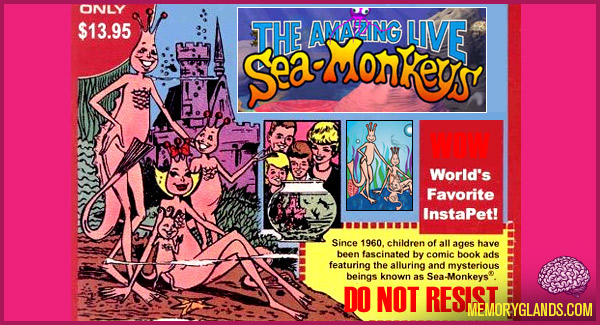 Sea-Monkeys is the brand name for brine shrimp – a group of crustaceans that undergo cryptobiosis – often sold in hatching kits as novelty aquarium pets.

Harold von Braunhut invented the product based on brine shrimp in 1957. Ant farms had been popularized the year before by Milton Levine. Initially called “Instant Life”, von Braunhut changed the name to “Sea-Monkeys” in 1962. This was based on the supposed resemblance of the animals’ tails to those of monkeys, and their living in salt water. The product was intensively marketed in comic books using illustrations of humanoid animals drawn by the comic book illustrator Joe Orlando, which bear no resemblance to the crustaceans. Von Braunhut is quoted as stating: “I think I bought something like 3.2 million pages of comic book advertising a year. It worked beautifully.” Many purchasers were disappointed by the dissimilarity, and by the short lifespan of the animals.