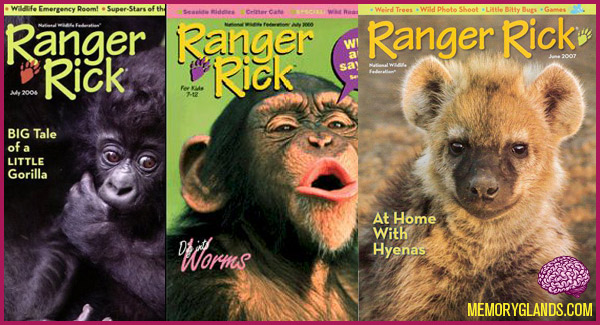 Ranger Rick was originally titled Ranger Rick’s Nature Magazine. Ranger Rick is a children’s nature magazine that began publication in 1967 by the National Wildlife Federation. The magazine offers activities for children, ages 7 and up, in order to spark their interest in the outdoors and become more actively involved in the environment. The magazine’s primary intention is to instill a passion for nature and promote activity outdoors. Children are growing increasingly distant from their environment, which raises a concern that conservational efforts in the future will diminish. However, Ranger Rick has taken this disinterest into account and has made some changes in its content to attract children and therefore promote environmental activism. NWF also publishes two companion magazines, Big Backyard, which is aimed at ages 3–7, and Wild Animal Baby, which is aimed at kids 12 months old to 4 years old.