Puttin’ On The Hits 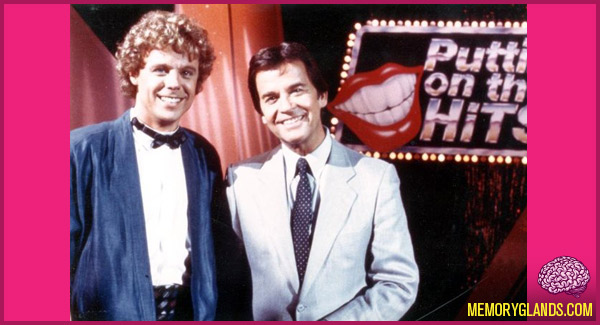 Puttin’ on the Hits was an American syndicated music/variety competition show hosted by Allen Fawcett. The show featured amateur acts lip-synching to popular songs. The show aired on weekends from 1984 through 1988.

The show grew out of lip synching contests developed by Wm. “Randy” Wood, who by 1982 had realized that his contests had grown so popular that he needed to stage them on a broader scale. The planning process eventually grew into Puttin’ on the Hits. Gong Show format creator Chris Bearde was credited in the same role for this series, and he and Dick Clark served as executive producers. Clark’s son, Richard A. Clark, produced, and MCA TV served as distributor. Puttin’ on the Hits was taped in Hollywood, California at Universal City Studios.

Contestants would often dress up in costumes and use props to make their act more outrageous. This varied from a seemingly severed head singing “I Ain’t Got Nobody” to an Aretha Franklin drag act using couch cushions for breasts. Other acts were more conservative and placed emphasis on performance.

The competition, as it was, was conducted as many other televised performance contests (e.g. Star Search) were. Each act was judged by a panel of celebrity judges based on their appearance, song choice, and lip-sync ability with a total of 90 points being the maximum value an act could score; to achieve that, an act would have to receive 10 points in each of the three categories from all three judges. The act with the highest score at the end of the show won $1,000. They also advanced to the Semi-Finals which is worth $5,000 and after that, the season-ending championship show (dubbed the “Grand Final”) worth $25,000 to the winning act.

Puttin’ on the Hits has been credited with launching the career of the group Troop, and Jazzmun, a drag performer who can be seen in many contemporary television shows. Kato Kaelin was another notable contestant, appearing during the show’s third season performing Steppenwolf’s Born to Be Wild.