Nick In The Afternoon 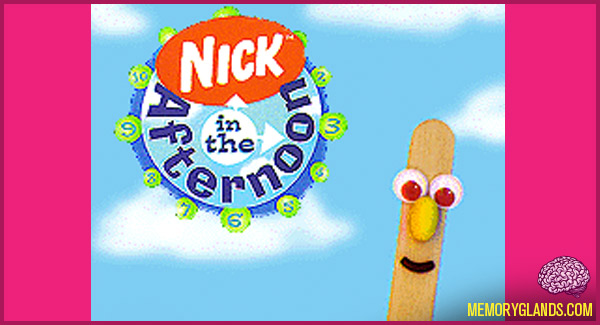 Nick in the Afternoon was a programming block on Nickelodeon that was aired from 1993 to 1998 on weekday afternoons during the summer, hosted by Stick Stickly, a popsicle stick voiced by New York City native Paul Christie (who would later voice Nick Jr. mascot, Moose A. Moose). The 1998 stint ran from the summer until December. Henry and June’s Summer replaced this Nickelodeon summer block a year later.

During its first summer, the programming consisted of normal Nickelodeon shows that would have aired regardless, but come its second summer, Nick in the Afternoon made some key changes, instead showing preselected Nicktoons with added segments such as “U-Pick” (viewers pick what show and episode they want to see) and U-Dip (viewers pick which substance Stick Stickly is dipped in or any substance at all using their bare feet). Viewers occasionally chose a program that hadn’t been aired on Nick in many years, for example You Can’t Do That on Television. The preselected segments were indicated by a dial using Stickly as the spinner, so as to keep the cartoons a surprise.