Monster In My Pocket 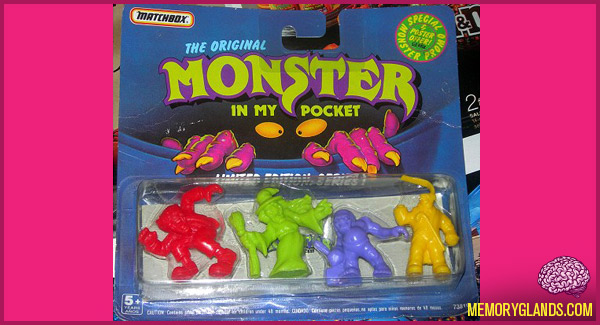 The focus of Monster in My Pocket was on monsters and legendary creatures from religion, mythology, literary fantasy, science fiction, cryptids and other anomalous phenomena. They produced trading cards, comic books, books, toys, a board game, a video game, and an animated special, along with music, clothing, kites, stickers, and various other items.

The line proved controversial for various reasons and many changes were implemented that took it away from its original mythmaking focus, though it has since reemerged with the original idea intact.

Monster in My Pocket was best known as a toy-line released by Matchbox in 1990. It consists of small, soft plastic figures representing monsters, and later other tangentially-related characters.

In its first run, there were eleven series released, the third being the rarest. There were over 200 monsters in the collection, most of which were assigned a point value. Among the highest valued monsters were the Tyrannosaurus Rex, Griffin, Great Beast, Behemoth, Hydra, Werewolf (25 points) and among the least being Charon, The Invisible Man, The Witch (5 points). Initially, the high point value was 25, which was elevated to 30 for the second and third series; the fourth, “Super Scary”, series introduced the 50-100 point monsters. The third series does not appear to have been formally released, though portions of it were released as premiums through Shreddies, Bob’s Big Boy, Pizza Hut, and Konami. Indeed, Monster Mailer #1, the Monster in My Pocket Collector’s Club newsletter, refers to the fourth series as “Series III”, in spite of a gap in numbering. They were initially solid-colored, though later series would gradually add more painted colors, until they became fully colored under the auspices of new toy makers Corinthian Marketing and Vivid Imaginations.