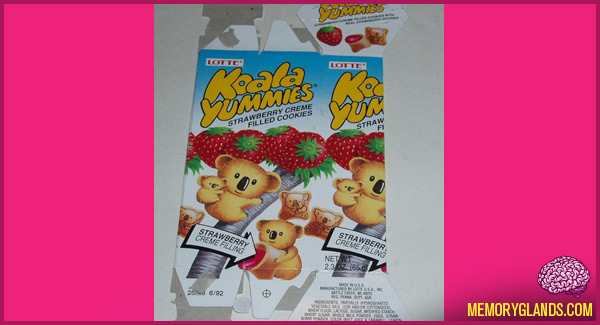 Koala Yummies are a bite-sized cookie snack with a sweet filling inside. It is made by Lotte, and the product was first released in Japan as Koala’s March, and was released in March 1984 as “Koala Yummies” in the United States. Because of this the origin of the snack is commonly misunderstood and believed to be Japanese while few know that it is really a product of Thailand.

Koala Yummies is in the shape of a koala with a picture of a koala on the outside of the cookie doing various activities. There are various flavors available for the filling, such as honey, cafe latte, and banana. The two most common flavors are strawberry and chocolate, and are the only flavors available in the US along with white chocolate creme filled chocolate cookies. The snack also comes in pineapple flavor, though it is rarer than the other flavors. Koala Yummies supports the Australian conservation group Australian Koala Foundation.