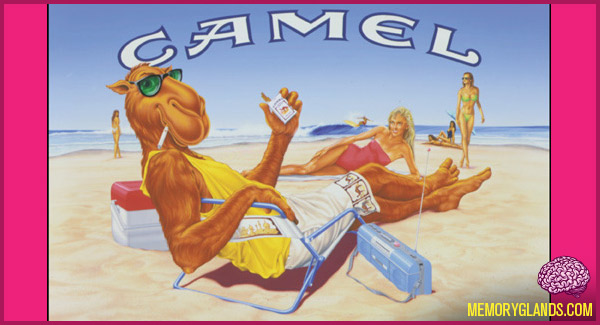 Joe Camel (officially Old Joe) was the advertising mascot for Camel cigarettes from late 1987 to July 12, 1997, appearing in magazine advertisements, billboards, and other print media.

In 1991, the Journal of the American Medical Association published a study showing that by age six nearly as many children could correctly respond that “Joe Camel” was associated with cigarettes as could respond that the Disney Channel logo was associated with Mickey Mouse, and alleged that the “Joe Camel” campaign was targeting children—despite R. J. Reynolds’ contention that the campaign had been researched only among adults and was directed only at the smokers of other brands. At that time it was also estimated that 32.8% of all cigarettes sold illegally to underage buyers were Camels, up from less than one percent. Subsequently, the American Medical Association asked R. J. Reynolds Nabisco to pull the campaign. R. J. Reynolds refused, and the Joe Camel Campaign continued. In 1991, Janet Mangini, a San Francisco-based attorney, brought a suit against R. J. Reynolds, challenging the company for targeting minors with its “Joe Camel” advertising campaign. In her complaint, Mangini alleged that teenage smokers accounted for US$476 million of Camel cigarette sales in 1992. When the Joe Camel advertisements started in 1988, that figure was only at US$6 million, “implicitly suggesting such advertisements have harmed a great many teenagers by luring them into extended use of and addiction to tobacco products.”

R. J. Reynolds to this day has denied Joe Camel was intended to be directed at children; the company maintains that Joe Camel’s target audience was 25-49-year-old males and current Marlboro smokers. In response to the criticism, R. J. Reynolds instituted “Let’s Clear the Air on Smoking”, a campaign of full-page magazine advertisements consisting entirely of text, typically set in large type, denying those charges, and declaring that smoking is “an adult custom”.
Internal documents produced to the court in Mangini v. R. J. Reynolds Tobacco Company, San Francisco Superior Court No. 959516, demonstrated the industry’s interest in targeting children as future smokers. The importance of the youth market was illustrated in a 1974 presentation by RJR’s Vice-President of Marketing who explained that the “young adult market . . . represent[s] tomorrow’s cigarette business. As this 14-24 age group matures, they will account for a key share of the total cigarette volume – for at least the next 25 years.” A 1974 memo by the R. J. Reynolds Research Department points out that capturing the young adult market is vital because “virtually all smokers start by the age of 25” and “most smokers begin smoking regularly and select a usual brand at or before the age of 18.”

In July 1997, under pressure from the impending Mangini trial, Congress and various public-interest groups, RJR announced it would settle out of court and voluntarily end its Joe Camel campaign. A new campaign with a more adult theme debuted: instead of Joe Camel, it had a plain image of a quadrupedal, non-anthropomorphic camel. This image is still used in advertisements for Camel today. As part of the agreement, RJR also paid $10 million to San Francisco and the other California cities and counties who intervened in the Mangini litigation. This money was earmarked primarily to fund anti-smoking efforts targeted at youth.