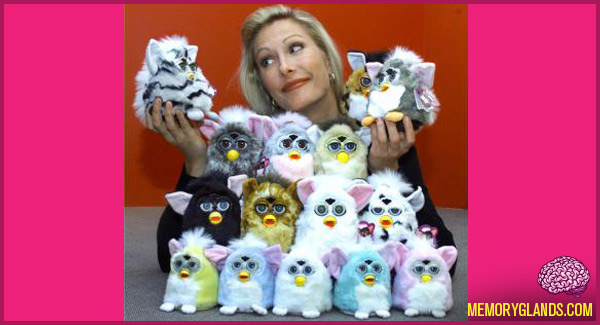 A Furby (plural Furbys or Furbies) was a popular electronic robotic toy resembling a hamster/owl-like creature which went through a period of being a “must-have” toy following its launch in the holiday season of 1998, with continual sales until 2000. Furbies sold 1.8 million units in 1998, 14 million units in 1999, and altogether in its three years of original production, Furbies sold over 40 million units. Its speaking capabilities were translated into 24 languages.

Furbies were the first successful attempt to produce and sell a domestically-aimed robot. A newly purchased Furby starts out speaking entirely Furbish, the unique language that all Furbies use, but are programmed to speak less Furbish as they gradually start using English. English is learned automatically, and no matter what culture they are nurtured in, they learn English. In 2005, new Furbies were released, with voice-recognition and more complex facial movements, and many other changes and improvements. The Emoto-Tronic Furbies (Furby, Furby Baby, and Funky Furby) continued to be sold until late 2007, when these toys became extremely rare.