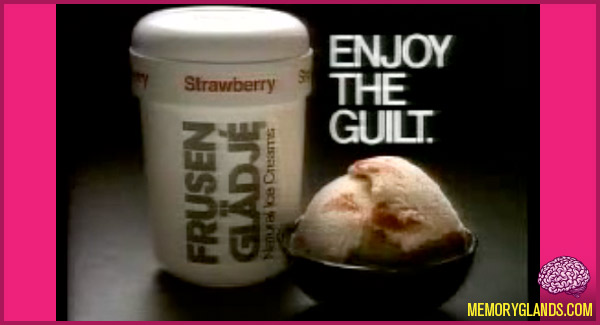 Frusen Glädjé was a company that made ice cream for the U.S. market. It was founded in 1980 by Richard Smith. Although the ice cream was made in the United States of America, it used a quasi-Swedish name and packaging of “Frusen Glädjé” (Swedish for “frozen joy” or “frozen delight”, although the correct Swedish spelling would be “Frusen glädje”, without the acute accent).

It was produced at a Dairy Lea plant with special equipment and sold in 10 states in 1981, including New York and California. Marketing materials said The ice cream that appeals to the sybaritic buyer with a taste for the very finest. Television commercials typically featured the catch phrase, “I ate all the Frusen Glädjé.”

Frusen Glädjé was available in eight flavors (15 in the New York shop). Frusen Glädjé was distributed in every state by the end of 1982, reaching an annual production of 30 million pints, up from 18 million in 1981.

Another ice cream producer, Häagen-Dazs, sued unsuccessfully in 1980 to stop them from using a “Scandinavian marketing theme”. Häagen-Dazs’s complaints included Frusen Glädjé’s “prominently displayed list of the product’s natural ingredients, a list of artificial ingredients not found in the ice cream, directions for serving and eating the ice cream (essentially that it was best served soft), and a map of Scandinavia.” The court ruled against Häagen-Dazs on the grounds of unclean hands, as Häagen-Dazs had similarly marketed itself as Scandinavian without having any connection to the region.

In 1985, Smith sold Frusen Glädjé to Kraft General Foods. A Kraft spokeswoman states that Kraft sold its Frusen Glädjé license to the Unilever corporation in 1993. A spokesman for Unilever claims that Frusen Glädjé was not part of the deal. The brand has since disappeared.