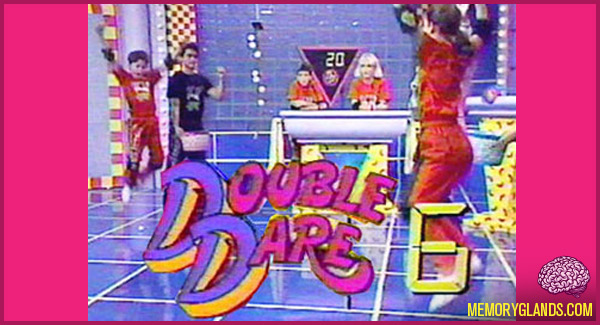 Double Dare is a children’s game show, originally hosted by Marc Summers, that aired on Nickelodeon. The show combines trivia questions with occasionally messy “physical challenges”. It is often credited with putting the then-fledgling network on the map, and ranked #29 in TV Guide’s list of the 50 Greatest Game Shows of All Time.

The show originated from the WHYY-TV studios in Philadelphia in 1986. In 1987, the show temporarily moved to New York City for a special weekend edition called Super Sloppy Double Dare. The show returned to Philadelphia in 1988; by then, Viacom syndicated the show to independent stations & affiliates of the young Fox network. Beginning in January 1989, more episodes of Super Sloppy Double Dare were produced (during which time Nickelodeon began airing reruns of the previous year’s syndicated episodes). Tapings began in Philadelphia, but later that year was moved to Universal Studios in Orlando. The show moved to Nickelodeon Studios in 1990, where it then became Family Double Dare, and it remained that until its cancellation in 1992. The final episodes aired in 1993.