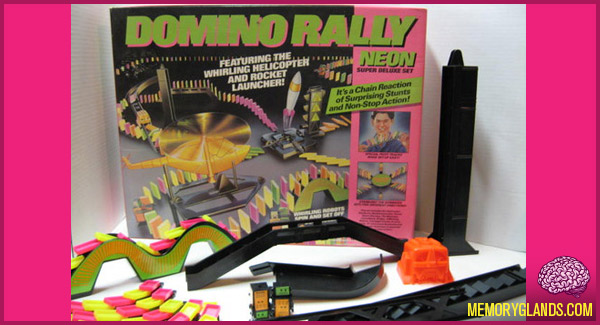 Domino Rally was a toy product manufactured by Pressman Toys in the 1980s and early 1990s.

Originally named “Domino Track” and designed by Jason Carroll, a 16-year-old boy, assisted by his father. The design was submitted to American Idea Management (AIM). Due to lack of knowledge and finances of the original inventor, the idea was successfully patented by Universal Product Innovations, Inc. and was Manufactured by Pressman Toys Inc. The original idea was robust, with well-designed interlocking track and high quality solid dominoes, but to avoid patent issues it is surmised that a less accurate version was designed.

Different sets were produced, each consisting of several hundred multicolored plastic dominoes They were not solid rectangular prisms, but rather were hollowed out on one side. The injection molding process used to make them also tended to leave protrusions on the standing edge. As such, they tended to fall over easily, particularly when being set up on the stepped staircases and bridges that came with the set. Newer Domino Rally sets included dominos that stood up better. Also some of the sets included tracks of snap-in dominoes that only fell in one direction, as well as a small wheeled car that would drop dominoes automatically as it moved. This car was dubbed the “Domino Dealer,” and was also sold separately.

In addition to the aforementioned flaws, the snaps on the dominoes were very easily broken. When this occurred, the domino was unable to be used in the snap-in assemblies of the set, and thus was ruined for good.