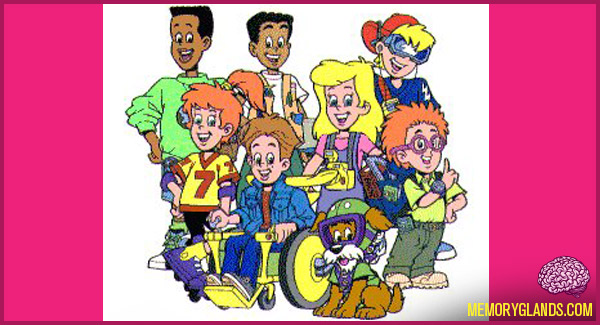 The members of the gang were:
Kid Vid, a Caucasian male who loved video games and technology; he was the leader of the group.
Boomer, a sports loving Caucasian tomboy with red hair tied into a ponytail.
I.Q., a male Caucasian nerd who wore red glasses, a green lab coat, and a pocket protector.
Jaws, a tall African-American male with an insatiable appetite.
J.D., a dog and the group’s mascot.
Lingo, a multi-lingual, Hispanic male who liked art and carried an easel.
Snaps, a blonde Caucasian female who always carried her camera.
Wheels, a Caucasian paraplegic male in a wheelchair.
Jazz, an Asian girl who loved music and sported a beret.

Each of the characters’ signatures reflected their personality, e.g. Boomer signed her name with a football and baseball for the “O”s.

Furthermore, Burger King created a “Kids Club” in which club members receive an annual mailing in the month of their birthday that contains games, product information, and a birthday gift in the form of a coupon for a free Kids’ Meal. Even though the BK Kids’ Club Gang has been discontinued in the US, the club itself continues in operation to this day and is the largest club of its kind in North America. Additionally, they can still be seen on some playground signs and decorations in some locations.

The Burger King Kids Club had a logo that was used from 1994–2001. The logo was a variation in the classic “Bun Halves” logo that BK introduced in 1969 and revised in 1994. It used the two “bun halves” like the main BK logo but the Burger King name was on one line under the top half of the bun, while the words Kids Club were on two lines below the BK name in a larger, different style font.