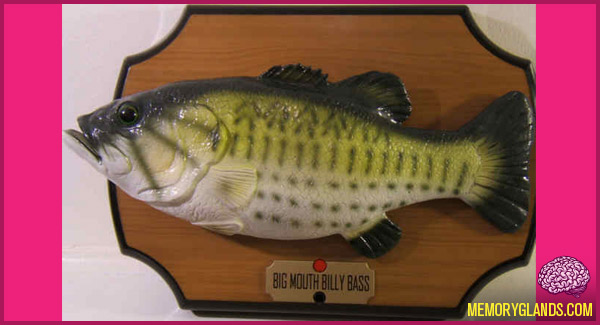 Big Mouth Billy Bass is an animatronic singing prop, resembling a Largemouth Bass, popular in the late 1990s and early 2000s. The fish is made of rubber stretched over a mechanical frame; at first glance it closely resembles a mounted fish. Designed by Gemmy Industries, it turns its head outwards and then wiggles on its trophy plaque and sings kitschy cover songs, such as “Don’t Worry, Be Happy”, “Pretty Fishy”, and “Take Me To The River”. The singing mechanism was originally activated by a motion sensor and was originally intended to startle a passerby. Eventually a button was added to activate it.