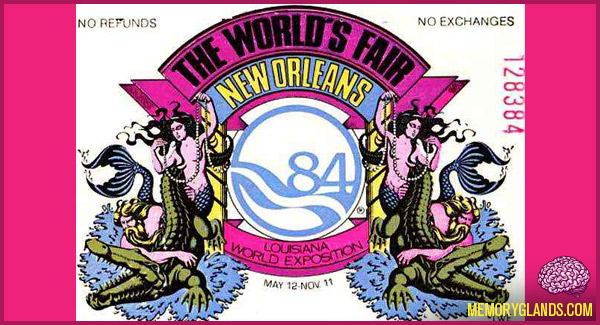 The 1984 Louisiana World Exposition was a World’s Fair held in New Orleans, United States. It was held 100 years after the city’s earlier World’s Fair, the World Cotton Centennial in 1884. It opened on Saturday, May 12, 1984 and ended on Sunday, November 11, 1984. It’s theme was “The World of Rivers—Fresh Waters as a Source of Life.”

Plagued with attendance problems, the 1984 Louisiana World Exposition has the dubious distinction of being the only exposition to declare bankruptcy during its run. Many blamed the low attendance on the fact that it was staged just two years and two states from Knoxville’s 1982 World’s Fair, and also on the fact that it coincided with the 1984 Summer Olympics in Los Angeles. There has not been a World’s Fair in the United States since.