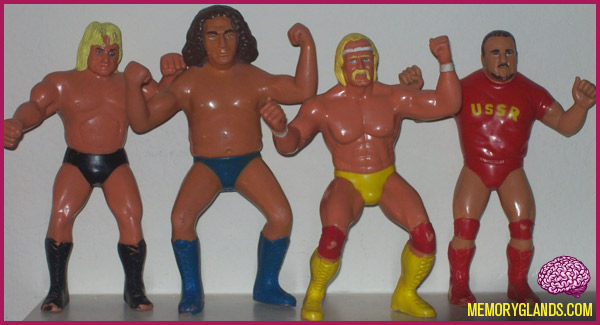 Wrestling Superstars was an action figure toyline based on the wrestlers of the WWF. They were made by the toy and video game company LJN from 1984 to 1989. The toys were made of solid rubber and were very accurate in appearance to their real life counterparts, however they did not have any articulation. The original 8″ figures were the first and most successful series from the line and other versions soon followed, such as Thumb Wrestlers, Stretch Wrestlers, and Bendies.

LJN closed its toy division in 1989, cancelling the Wrestling Superstars series with it. The last 6 figures which were produced did manage to get released by Grand Toys of Canada. They were the distributor of the entire Wrestling Superstars series in Canada. Hasbro were awarded the license as the main WWF action figure producer the following year.

These figures have become quite collectible, partly due to wrestling’s ongoing popularity and the 1980s nostalgia boom. However, it is somewhat difficult to find them in good condition. The paint on the figures would easily come off during play, leaving most figures in poor shape. The price for mint figures goes from about $45 and all the way up to $300. In poor condition, most of the line isn’t worth very much due to their great abundance. The figures that remain carded can command much higher prices though. In good condition, a mint on card figure can range from about $20 to $1200.