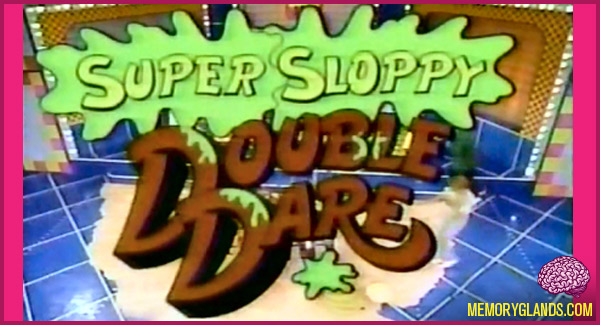 The format of Super Sloppy Double Dare copied that of the original program. Launched in 1987, it aired on the weekends on Nickelodeon. This incarnation featured a home viewer contest during physical challenges, with Summers taking a postcard from a large plastic box behind his lectern. The viewer would receive a prize if the team won the physical challenge, and a T-shirt (regardless of the outcome). This version was filmed at Unitel Studios in New York. Forty episodes were taped.

To compete with other children’s game shows at the time, the format returned to the air (minus the home viewer contest) in January 1989 with the physical challenges and obstacle course mostly designed to make the biggest mess possible. This newly revamped Super Sloppy Double Dare filmed from WHYY’s Forum Theatre for approximately the first 50 episodes, eventually to moving to Universal Studios in Florida to film the approximately 50 remaining episodes of this version. Both the Philadelphia and Orlando eras of the show aired in syndication. Many special “theme shows” were taped during the 1989 run, including “Salute to Baseball”, “Backwards Day”, “Marc vs. Harvey” (with guest host Jim J. Bullock), and many more. This was Nickelodeon’s first production at Universal Studios.