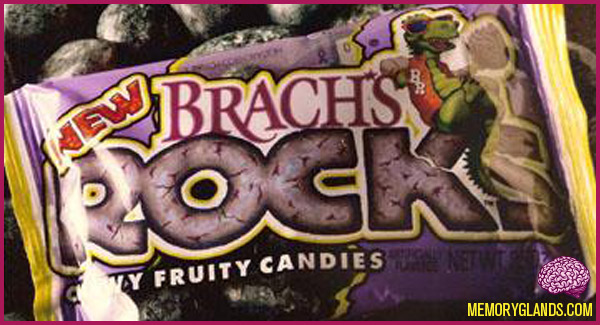 Brach’s Rocks were a pebble-shaped candy introduced in 1992. They had the coloring and appearance of granite, with fruity, chewy centers. They were advertised in commercials by a dinosaur character named Rocky D, “Dinosaur Extraordinaire”, who was shown popping them into his mouth. Rocky D wore sunglasses and a red jersey with the letters BR on it. Kids’ love of dinosaurs was the inspiration for this character and candy. Laughing Dog developed the dinosaur character and the graphics. The package had transparent panels so those looking at the packages in a store could see the rocks inside.