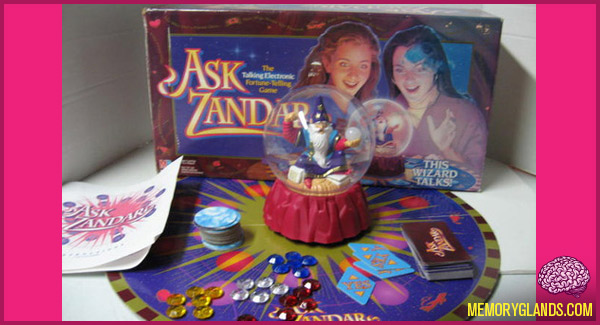 Released in 1992, Ask Zandar is a game for 1-4 pre-teen to early teenage girls. On their turn, each player draws a question card, reads it out loud, guesses whether Zandar (an electronic talking version of the old “Magic 8 Ball”) will answer affirmatively or negatively, waves their hand over the top of Zandar’s globe (to trigger a light sensor), and listens to his answer. If they guessed correctly, they can either take a gem of their color from the pile and put it in front of them or place a gem of their color from in front of them onto the game board. If they guess incorrectly, they must return a gem from in front them.

There’s a few other rules to the game, but that is main gist of it. The first player to place 5 of their gems onto the game board wins and gets to have their fortune read by Zandar.