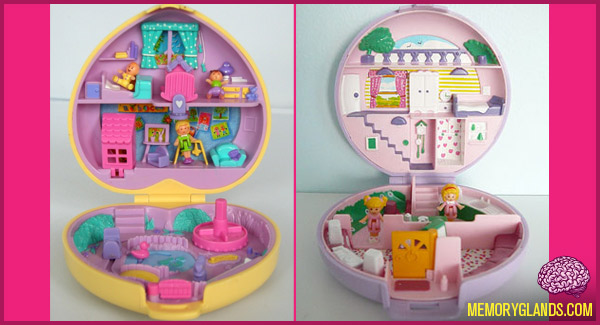 Polly Pocket is a toy line of dolls and accessories. The name comes from the fact that many of the original Polly Pocket dolls came in pocket-size cases. The current Fashion Polly dolls sold by Mattel differ significantly from those originally sold by Bluebird Toys. The original Bluebird dolls were less than one inch tall and made of hard plastic. Mattel’s versions are two to three inches tall and are composed of a pliable plastic with soft rubberized clothing and fashion accessories.

Polly was first designed by Chris Wiggs in 1983 for his daughter Kate. Using a powder compact, he fashioned a small house for the tiny doll. Bluebird Toys of Swindon, England licensed the concept and the first Polly Pocket appeared in stores in 1989.Mattel held a distribution arrangement with Bluebird Toys for Polly Pocket items in the early-1990s. In 1998, while production lulled, Bluebird Toys endured several hostile take-over attempts until Mattel finally purchased them later that year.