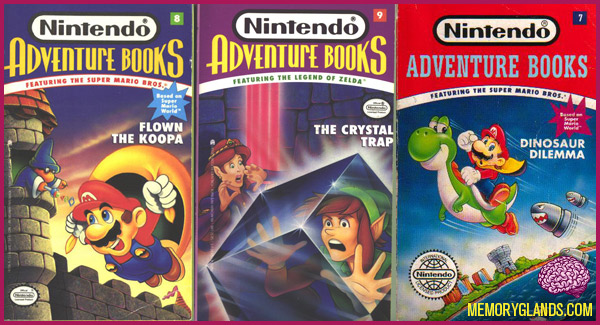 The Nintendo Adventure Book series was published from 1991 to 1992 by Archway books, and Mammoth books in the United Kingdom. There are twelve in all. They are formatted like the popular Choose Your Own Adventure books, where the reader makes decisions that change the outcome of the story. Ten of the books are about the Mario Bros.’ adventures in the Mushroom Kingdom and are based primarily on the Valiant comics published for the Nintendo Comics System imprint. Books nine and ten are about Link from The Legend of Zelda series.

Each book is exactly 121 pages long. There is an inventory system where the player collects items to solve puzzles (shown in a collage of pictures on the last page of the book), and scoring system where the player can judge how well they did on a scale at the end of the book. In books 1-5, 7 and 8, this is judged by multiplying the number of coins the player collected in the course of the adventure by ten, but in books 6, 9-12, the player is simply awarded a certain number of points for overcoming challenges (the coin scoring system was joined with the point system in book eleven). There are several endings in each book. There is one victorious ending, and unsuccessful (often lethal to the characters involved) endings say Game Over.