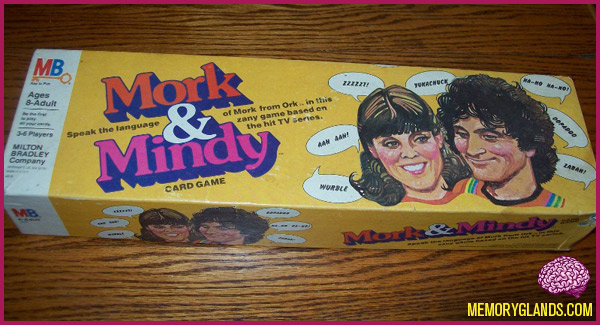 This game is based on the 1979-1982 ABC TV series starring Robin Williams.

From the rules:
“Meet Mork. He’s from Ork, and he’s come to Earth to learn all he can about our planet. To win the hearts of Earthlings everywhere, Mork has brought along this crazy Orkan game. In it, you and your opponents move around a special Orkan board doing such out-of-this world things as “splinking” and “grebbling up.” All the while, you’ll be trying to win coins called Grebbles. But don’t panic. Mork and his Earthling friend Mindy will be there to help. So shake hands Orkan style, and begin!”