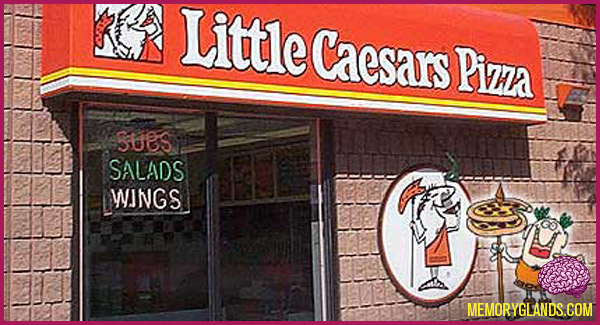 Yes I know. Little Caesars still exists. I miss the old Little Caesars. When they had Crazy Bread and sweet commercials and none of this $5 Hot & Ready bullshit that tastes like cardboard.

Little Caesars is a pizza chain, estimated to be the 4th largest in the United States. The Little Caesars headquarters is located in the Fox Theatre building in Downtown Detroit, Michigan.

Little Caesars Pizza was founded by Michael and Marian Ilitch on May 8, 1959. The first location was a strip mall in Garden City, Michigan, a suburb of Detroit. Mike wanted to call it simply “Pizza Treat,” but Marian wanted a name that suited Mike. Marian considered Mike her “little Caesar”. Mike ultimately relented, and the store opened as “Little Caesar’s Pizza Treat.” The original store is still open today.

The company is famous for its advertising catchphrase, “Pizza! Pizza!” which was introduced in 1979. The phrase refers to two pizzas being offered for the comparable price of a single pizza from competitors. Originally the pizzas were served in a single long package. In addition to pizza, they served hot dogs , chicken, shrimp, and fish. Little Caesars has discarded the unwieldy packaging in favor of typical pizza boxes. Currently, the chain is best known for its “Hot-N-Ready” pizzas, large pizzas with popular toppings available for immediate takeout at a low price ($5.00 in most U.S. stores). Crazy Bread, strips of pizza dough covered in garlic spread and Parmesan cheese is also a staple item on their menu and a popular side-dish.

On November 1, 2010, Little Caesars introduced Pizza! Pizza! Pantastic, denying that the return of “Pizza! Pizza!” had any relationship to the recent success of Domino’s, plus they deliver at some locations.