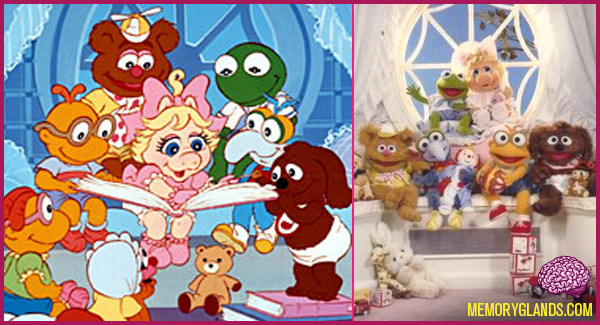 Jim Henson’s Muppet Babies (also known as simply Muppet Babies) is an American animated television series that aired from September 15, 1984 to November 2, 1991 on CBS. The show portrayed childhood versions of the Muppets living together in a large nursery in the care of a human woman called Nanny (the whereabouts of their parents are never addressed). Nanny appears in almost every episode, but viewers never see her face, only the babies’ view of her pink skirt and purple sweater as well as her distinctive green and white striped socks.

Although the episodes were 30 minutes (including commercials), it was typically shown in 60 and even 90 minute blocks during the peak of its popularity. The idea of presenting the Muppets as children first appeared in a dream sequence in The Muppets Take Manhattan, released two months before Muppet Babies debuted, in which Miss Piggy imagined what it would be like if she and Kermit the Frog grew up together.