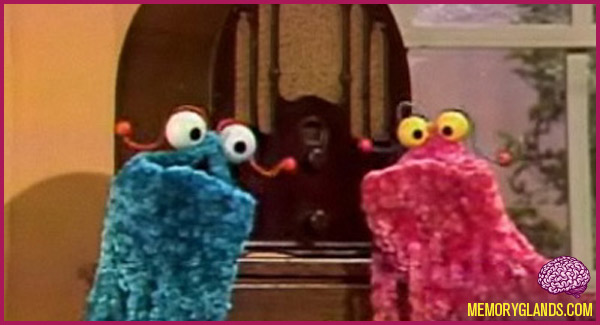 The Yip Yips (also known as the Martians or aliens) are characters on the popular American children’s television show Sesame Street. They are interplanetary visitors, from the planet Mars (in the first skit, as soon as they descend, their first words to each other are “…Not Mars.” “Nope.”). They marvel at devices such as clocks, telephones and computers. When frightened, each covers its face with the lower part of its jaw while making a distinctive “goom” noise.

In their skits, these creatures, with squid-like tentacles, large eyes, and antennae, materialize into a room and say, “Yip-yip-yip-yip… Uh-huh. Uh-huh”, in monotone voices. They come across common objects and, curious as to their names and functions, the Yip Yips consult a book they call “Earth book” which presumably contains information about things on Earth. For example, in their first skit the Yip Yips try communicating with a telephone by common greetings such as “Hello”, “Greetings”, and “Hi there!” unsuccessfully. After each failure they say “nope nope nope”. Next they address the phone as a cow, a cat, and then a chicken, only finally learning what it really is when it rings. They “ring” back at it with their voices, clearly pleased to have identified and established communication with it.

They are “Yip Yipped” by multiple muppeteers including Jim Henson, Frank Oz, Jerry Nelson, Martin P. Robinson, and Kevin Clash. The puppets have a very simple design, controlled entirely by two rods (one for the body and eyes, the other for the front of the mouth). This allows their entire bodies to be seen on camera, appearing to float in the air.

The two Yip Yips seen most often are called “Bob” and “Joe”. On the Dutch version, Sesamstraat, the Yip Yips are called “Sjoerd and Hendrik Marsman”, referring to the early 20th century poet Hendrik Marsman. Note that in Dutch, Marsman does literally mean “Martian”.