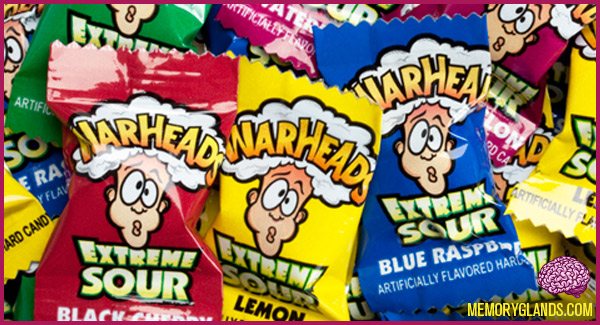 Warheads is a brand of sour candy manufactured by Impact Confections. The candy was invented in Taiwan in 1975 and was first imported to the United States by The Foreign Candy Company in the early 1980s. For a while, “hot” versions of the candy were also available but proved to be less popular.

Warheads derive their strong sour flavor primarily from malic acid which is applied as a coating to the outside of the small, hard candies. The intense sour flavor fades after about 20 to 40 seconds. The hard candy itself contains the somewhat less sour ascorbic acid and citric acid. At the center of the hard candies is a small pocket of more malic acid.

It pained me to buy a pack of Warheads last week to realize that the sour-shock factor has gone down tremendously over the years.