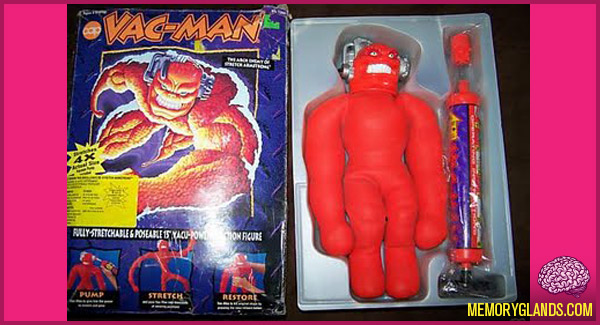 Vac-Man is the red nemesis of Stretch Armstrong who is suggested to be from a faraway galaxy. Unlike the Stretch dolls which contained a syrup-like liquid inside a rubber sheath, Vac-Man (and associated models like the Vac-Pac which were the heroic enemies of Vac-Man) contained a grainy solid, produced from ground-up corn cobs. By attaching the provided pump to a socket on Vac-Man’s head, air could be sucked out until the body became rigid. It could then be stretched, but unlike Stretch Armstrong, it would retain its stretched shape until air was let back in.